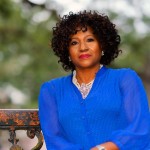 Brought up on the Mississippi Gulf Coast as a Catholic, God took Brenda under His wings when she was 12 yrs of age.  Her mother was confined from a massive stroke and her father passed when she was 16.

After graduating as a honor roll student and getting her associates degree in business – Brenda married Freddie Terrell and moved to Texas where they became members of Antioch Missionary Baptist Church in Baytown, TX under Pastor Sherman Gray, Jr.

Being a Spirit-filled Baptist church – Brenda received the baptism of the Holy Ghost, became an intercessor, a Sunday School teacher, along with working with the youth and Women’s Ministries.  She loves to encourage others in the gifts God has given them.

Brenda is a proud mother of five children – Katrina, Freddie, Charity, Terri and Trent  – and grandmother of three Grandsons – Jaih, Brent and Brendon.

Throughout the years of God’s blessings – Brenda has the power of the Lord moving miraculously in many aspects from deliverance to healing – including herself when she was attacked with stroke symtoms (twice).

Back to her roots – Brenda resides in Ocean Springs, MS and a member of Victory International Christian Center, where Pastor C.G. McCarter is the Senior Pastor.

Brenda is an Ardyss distributor who loves the products and enjoy helping people become healthy again.  And utmost she is looking forward to greater things in Christ Jesus with her husband, Freddie, of 36 yrs!!

Presently, Brenda is the Prayer General for The Master’s Call and so prayerfully and effectively always serves with a Spirit of Excellence.